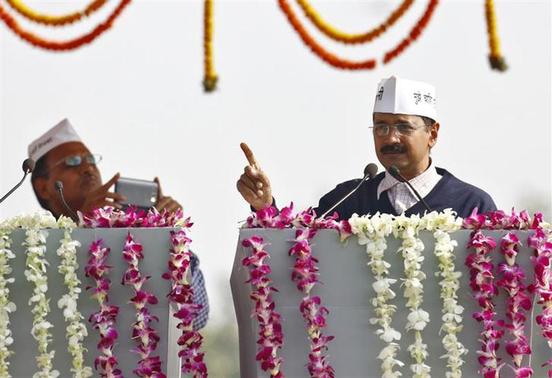 There was no motorcade, and none of the traditional trappings of power: the leader of India’s upstart Aam Aadmi Party (AAP) or “common man party”, arrived on a crowded metro train on Saturday to be sworn in as chief minister of Delhi.

Tens of thousands of jubilant supporters watched as Arvind Kejriwal, a mild-mannered former tax official, was anointed after a stunning electoral debut that has jolted the country’s two main parties just months before a general election.

The emergence of Kejriwal’s AAP as a force to be reckoned with barely a year since it was created on the back of an anti-corruption movement could give it a springboard to challenge the mainstream parties in other urban areas in the election due by next May.

That could be a threat to the front-runner for prime minister, Narendra Modi of the Bharatiya Janata Party (BJP), who is counting on strong support from urban, middle-class voters.

“Today, the common man has won,” Kejriwal said in a triumphant speech at Delhi’s Ramlila grounds, the very place were huge protests over corruption erupted in 2011, opening the way for the birth of the AAP.

“This truly feels like a miracle. Two years ago, we couldn’t have imagined such a revolution would happen in this country.”

In a December 4 election to the legislative assembly of Delhi, a city of 16 million people, no party won the majority of seats required to rule on its own.

The impasse that ensued was broken after the AAP – in a display of citizenship politics – consulted the people of the city. It then agreed to lead the Delhi government with “outside support” from the Congress party, which heads the national ruling coalition.

Opinion polls show that Congress, the party of India’s celebrated Nehru-Gandhi dynasty, will be punished in the general election because of disgust with a government whose two terms have brought corruption scandals and stubborn inflation.

A THREAT TO MAINSTREAM PARTIES

Wearing a simple blue sweater and with a boat-shaped Gandhi cap on his head, Kejriwal pledged to set up an anti-bribery helpline.

“If anyone in the government asks you for a bribe, don’t say ‘no’,” he said. “You report it on the phone number and we’ll catch every bribe-taker red-handed.”

Kejriwal, who has tapped into a vein of urban anger over the venality of the political class and the neglect of citizens’ rights in the world’s largest democracy, has promised to expand his movement across the country.