After days of waffling over how to handle Anna Hazare and the frenzy of national support for his fast against corruption, the Government is trying to find its footing. 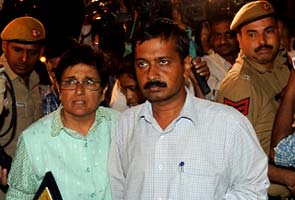 So, entire bouquets of olive branches are being delivered.  Finance Minister Pranab Mukherjee who doubles up as the Government’s main trouble-shooter has been deputed to hold talks with three of Anna’s associates.  The Prime Minister has written to Anna, urging him to end his hunger strike, now on its eighth day.  And spiritual guru Sri Sri Ravishankar is mediating between the government, Team Anna and the Opposition.

At North Block, Mr Mukherjee is meeting with Arvind Kejiwal, Prashant Bhushan and Kiran Bedi, all front-liners of the India Against Corruption campaign.  The talks are likely to centre around the offer made by the PM to Anna about the activists’ version of the anti-corruption Lokpal Bill.  Dr Manmohan Singh has offered to present the bill to the Parliamentary Standing Committee in charge of studying the Lokpal Bill.  So far, that committee had focused on the government’s draft, described as weak and ineffective by Team Anna.

Mr Bhushan told NDTV that the Standing Committee’s perusal of the activists’ bill may not amount to more than “a delaying tactic.”  He also stressed that the committee’s recommendations are not binding.    Anna and his associates want their bill to be debated directly by parliament.
As public support for Anna peaked over the weekend with thousands of people marching to his sit-in at Ramlila Maidan, the government offered that some features of Anna’s bill could be tagged onto the government’s draft for consideration by the Standing Committee.   The PM’s offer today goes far beyond that, suggesting that if the Lok Sabha speaker permits, the entire document prepared by Team Anna could be reviewed.