Prime Minister Manmohan Singh and then Finance Minister P Chidambaram were fully in the loop on the 2G spectrum license allocation and had decided along with then Telecom Minister A Raja not to auction them, jailed DMK MP Kanimozhi told a Delhi court today. 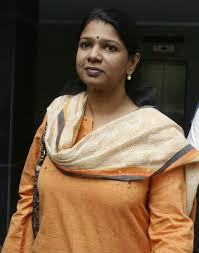 “I am showing you (judge) the minutes of the meeting in which the Prime Minister, the then Finance Minister and the Telecom Minister decided that the licences for the 2G spectrum was not to be sold/auctioned,” senior advocate Sushil Kumar, appearing for Kanimozhi, told the Special CBI Judge O P Saini.

Seeking discharge from the case, the counsel for the 43-year-old DMK MP, said the CBI case is based on the premise that the accused caused huge loss to the state exchequer by not auctioning the licences for the 2G spectrum.

“The Prime Minister, the then Finance Minister and the present Telecom Minister are ‘good enough’ as witnesses to prove that there was no loss. They are on record in Parliament that the government did not incur any loss,” Kumar said.

“The moment, the loss factor goes out, the charge of cheating also goes out,” Kumar said, adding that the basic foundation of the CBI case cannot sustain the legal process.

The defence counsel also trashed the computation of loss by the CBI and the Comptroller and Auditor General (CAG) saying they are “just notional loss” and cannot be a basis for prosecution of the accused.

“The CAG report (of loss of Rs 1.76 lakh crore to the state) was laid before the House on November 16, 2010. It had not been adopted by the House. It is still in the limbo as the House is yet to adopt the report,” the counsel said.

The counsel for Kanimozhi also disputed the computation of loss of Rs.30,984 crore by the CBI saying it too has no basis as the charge sheet said that government could have earned more by auctioning the licences.

“The words — could have — cannot be the basis of prosecution as the relevant paragraph in the charge sheet is (a) full myth,” the defence counsel said.

“The sale of equities by Swan Telecom and Unitech Wireless (Tamil Nadu) (the two alleged beneficiaries of the scam) to foreign firms, Etisalat and Telenor, respectively were approved by the government. It was not the sale of the licences and hence there was no loss,” the defence counsel argued.

“Where is the sale (of the licences)? Where is the cheating?” asked the counsel for the DMK supremo M Karunanidhi’s daughter, arrested by the CBI on May 30 for her alleged role in the scam.

Her arguments, opposing charges of corruption and other penal offences like cheating and hatching criminal conspiracy in the 2G scam is still on.

Kanimozhi’s arguments seeking her discharge from the case virtually echoed those of former Teleceom Minister A Raja who too had sought to rope in the Prime Minister and Chidamabaram in the case, telling the court that the issue of dilution of equity by spectrum licencees was discussed with them.

Her counsel is the same as that for Raja — senior advocate Sushil Kumar.

Defending 47-year-old Raja against corruption charges in 2G scam, Kumar had told the court that there was nothing wrong in his decision of not auctioning 2G spectrum and that he was merely following the policies pursued by his predecessors and the NDA government.

Kumar had said when Home Minister Chidambaram was the Finance Minister he had told the Prime Minister that dilution of shares by the accused licencees to attract FDI did not amount to sale of licence.

Arguing that the sale of equity was not the sale of licence, Raja’s counsel had said he cannot be accused of corruption in the controversial 2G spectrum allocation.

“The matter (about sale of equity by spectrum licencees) was discussed between the Prime Minister and the then Finance Minister.

“The then Finance Minister( who is now Home Minister) had said in front of the Prime Minister that dilution of shares does not amount to sale of 2G licence as per the corporate law,” Raja’s counsel had asserted, even adding “Let the Prime Minister deny this.”

He had further said, “When sale of equity does not amount to sale of licence, there in no question of earning profit. How can there be corruption in this regard?”

The CBI, in its second Charge sheet, had alleged that Kanimozhi, who holds 20% stake in the DMK-run Kalaignar TV, accepted Rs 200 crore from various firms promoted by Shahis Usman Balwa, another key accused in the scam.