Karnataka Chief MinisterBS Yeddyurappa was Thursday asked to step down immediately by the Bharatiya Janata Party (BJP) after the Lokayukta indicted him for illegal mining in the state. 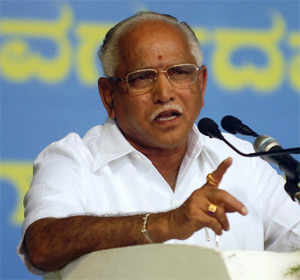 The decision to ask Yeddyurappa to quit was taken by theBJP parliamentary panel that met at the residence of party president Nitin Gadkari, spokespersonRavi Shankar Prasad told reporters.

“The parliamentary boards unanimously decided that there has to be a change in the Karnataka BJP legislative party. The party has advised Yeddyurappa, the current chief minister, to tender his resignation immediately,” Prasad said after the meeting.

BJP’s Arun Jaitley andRajnath Singh will fly to Bangalore Friday for the election of the new chief minister in Karnataka.

A defiant Yeddyurappa, 68, the BJP’s first chief minister in the south, had ruled out his resignation.

“The question of resigning does not arise,” Yeddyurappa told reporters Wednesday night as he flew to the capital for an emergency meeting with BJP leaders.

Karnataka ombudsman N. Santosh Hegde had Wednesday recommended the prosecution of Yeddyurappa for multi-crore illegal mining in the state along with four ministers and others.

“Also most of the cases referred to by the Lokayukta are old. Some of these cases are in Supreme Court and some in high court,” he told reporters at Bangalore airport.

He also said the state cabinet will meet in Bangalore Thursday to discuss the report.

The 25,228-page report seeks trial of Yeddyurappa and his four ministers, among others over illegal mining in the state, estimated to have cost Rs.16,085 crore (Rs.161 billion) due to illegal mining and export of iron ore from 2006 to 2010 in royalty, excise duty, value added tax and other levies.