The CBI is on Friday likely to file an FIR against former communications minister Dayanidhi Maran in the  2G Scam. 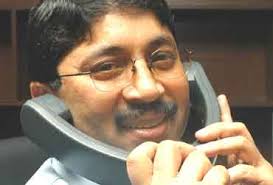 In its status report, the CBI had on Wednesday told the Supreme Court that it had completed the preliminary inquiry into Maran’s role in the 2G scam.

The investigating agency told the apex court bench of Justice G.S. Singhvi and Justice A.K. Ganguly that the conclusions drawn on the basis of the initial inquiry were being looked into by its officials.

The decision on the filing of an FIR against Maran will be taken on Friday. This will be followed by a chargesheet.

Shares of Sun TV, promoted by Maran family, on Thursday fell sharply by over 7 per cent amid concerns emanating from the CBI’s submission in the Supreme Court.

Shares of low cost air carrier Spicejet, promoted by Maran family, also fell by 6.19 per cent to close at Rs 21.20 on the BSE.

Similar was the trend at the National Stock Exchange, where the stock lost 6.25 per cent to close at Rs 246.15.