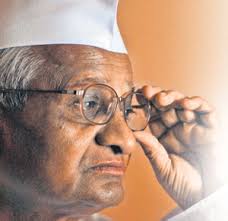 issue. Speaking to IBN Lokmat Editor Nikhil Wagle at the Ramlila Maidan, the 74-year-old social activist clarified that he will not negotiate with any other mediator including Union Home Minister P Chidambaram or Union Telecom and HRD Minister Kapil Sibal.

Hazare said that Lokpal Bill negotiations cannot happen with non-government mediators and added that he can talk with the Prime Minister’s Office or Rahul. He also added that he was ready to talk with Maharashtra Chief Minister Prithviraj Chavan.

He said that no official mediator has approached him or his associates till now and also added that would not speak to anyone without the presence of his advisers.

Demanding that the Lokpal Bill introduced by the United Progressive Alliance (UPA) Government in Parliament be withdrawn immediately as it was weak and coont fight the corruption menace, Hazare stated that state level Lokpal mechanism cannot be diluted.

Hinting at some flexibility on the issue of excluding judiciary under the Lokpal, Hazare said that this demand could be discussed during the talks. He, however, added that the Judicial Accountability Bill must be strengthened if judiciary has to be kept out of the Lokpal.

He made it clear that he was not in favour of negotiating with non-political mediators like spiritual guru Bhayyuji Maharaj and senior Maharashtra bureaucrat UC Sarangi, who were involved in back-channel talks with Team Anna on Sunday.

Khurshid said that the issue can be resolved by talks.

“Talks must take place to resolve this issue. The fact that 2 lakh people are protesting is significant. But what the people really want can be decided only through elections. The Bill will be presented to the Standing Committee,” said Khurshid.

Hazare’s fast entered the seventh day on Monday with doctors reporting that he had lost 5 kg in the last one week.