Three months after the civil society initiated a movement, the Union Cabinet today approved the Lokpal Bill keeping the office of Prime Minister outside its purview during his term in office and also excluded higher judiciary and conduct of MPs inside Parliament. 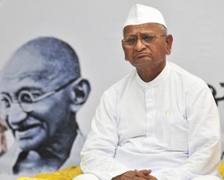 The bill, which has included some of the provisions of the Jan Lokpal Bill proposed by Team Anna Hazare, gives permission to Lokpal to probe any Union Minister or officials of Group A and above without any sanction.

At the meeting, Prime Minister Manmohan Singh insisted that his office be included in the legislation, but the Cabinet decided otherwise, Information and Broadcasting
Minister Ambika Soni told reporters after the meeting.

She said the Prime Minister was heard with “great respect” but the ministers discussed the “pitfalls” of such a proposal including its possible adverse effect on the stability of a government and creation of uncertainty.

The bill will be introduced in Parliament in the first two days of the Monsoon session beginning August one.

The Lokpal consisting of Chairperson and eight members, half of them judicial, will have its own prosecution and investigation wing with officers and staff necessary to carry out its functions.

While the Chairperson would be a sitting or retired Chief Justice of India, the members would include former or sitting judges of Supreme Court or Chief Justices of the High
Court, Law Minister Salman Khurshid, who was also present with Soni and Minister of State in PMO V Narayanaswamy, said.

Persons with “impeccable integrity”, with 25 years of experience in administration who has dealt with corruption and vigilance, would also form part of the Lokpal, he said.

The institution would inquire into allegations of corruption in respect of the Prime Minister “only after he demits office”.

Besides, it would also take up corruption matters allegedly involving Ministers, MPs, Group ‘A’ officers and others equivalent to this grade in any body, Board, authority,
corporation, trust, society or autonomous body set up by an Act of Parliament.

The Lokpal would not require sanction or approval under Section 197 of the Code of Criminal Procedure, 1973 or Section 19 of the Prevention of Corruption Act, 1988, in cases where prosecution is proposed.

The Lokpal will also have powers to attach the property of corrupt public servants acquired through corrupt means.

Claiming credit for bringing in the much-debated legislation, Soni said the issue was part of the manifestos of the Congress party and the UPA-I government as was the Right to Information and the rural employment guarantee scheme. “With this, another major commitment is being fulfilled”.

The time limitation of a corruption case would be seven years from the date it is registered, Khurshid said, adding that there was no time-bar so far as Prevention of Corruption Act was concerned.

“This is a special and important provision that has been made. It would ensure accountability and transparency and will not adversely affect” governance and administration.

“We don’t want to give people unlimited protection, neither do we want to throw them to the wolves,” he said.

To questions on the selection of the Lokpal, the Law Minister said a nine-member selection panel, headed by the Prime Minister, would be created. It would include, among
others, the Speaker, the Leaders of Opposition of Rajya Sabha and Lok Sabha, one Minister and eminent jurists.

Lokpal, which would have a five-year tenure, would not have the power to prosecute. It would recommend prosecution to the Supreme Court, he said.