The Telecom Regulatory Authority of India (TRAI) on Thursday gave a much needed boost to jailed former union telecom minister A Raja, when it said that Raja had followed government policy in the distribution of 2G spectrum allocation. 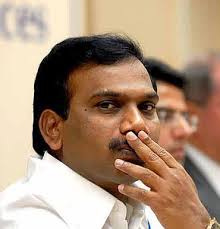 It said that it is not possible to determine the losses caused by Raja’s controversial handling of licenses in 2008.

That’s likely to cause some serious heartburn for the Central Bureau of Investigation (CBI), which is investigating Raja and some of India’s senior-most executives in the telecom sector, who are now in Tihar Jail.

The CBI has said that in 2008, Raja conspired with these companies to give them out-of-turn licences for mobile networks and accompanying second-generation or 2G spectrum. The CBI believes this cost India 30,000 crores. Experts believe that Mr Raja deliberately and greatly under-valued the licences to favour these companies.

Raja has claimed that he went strictly by the book, and that the Prime Minister and then Finance Minister P Chidambaram had signed off on his course of action.

At the time, he has said, the policy required him to sell and not auction spectrum.

The Telecom Regulatory Authority of India (TRAI) has now told the CBI that Raja was correct.

On September 15, a special court assigned to handle the 2G case will decide if charges against Raja and the arrested telecom executives should be framed.

The judge will decide if they should be put on trial and whether there’s any merit to the CBI’s allegations against them.