Buses of the state-owned Andhra Pradesh Road Transport Corporation (APSRTC) went off the roads Friday as a daylong shutdown called by the Telangana Joint Action Committee (JAC) hit normal life here and in nine other districts of Telangana. 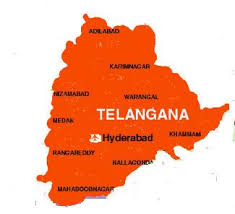 The JAC, which is spearheading the movement for a separate state of Telangana, has called the shutdown to protest the state government refusing to allow Telangana leaders to pay homage to M. Yadi Reddy who committed suicide in New Delhi Wednesday.

Reddy’s body, which was flown from Delhi Thursday night, was taken in an ambulance to his native village Peddamangalarm. Police arrested scores of Telangana supporters who were on their way to the airport to receive his body.

JAC is also protesting the state’s attempts to curb the right of the employees to go on strike.

The shutdown began on a violent note in the state capital here as protestors damaged about 20 buses on the outskirts early morning, forcing APSRTC authorities to suspend all the services.

Drivers and conductors of APSRTC buses coming here from Guntur were injured when protestors pelted stones in LB Nagar. Eight buses were damaged at Bowenpally in Secunderabad while a private vehicle was targeted at Jeedimetla, police said.

The incidents forced APSRTC to suspend all the services to and from here. City services were also suspended, causing severe inconvenience to commuters.

Buses could not come out of depots as APSRTC employees also joined the strike and staged protests outside the depots along with activists of various political parties and students.

Mahatma Gandhi Bus Station here wore a deserted look. On a normal day, 3,500 buses are operated from the biggest bus station in the state.

Schools and colleges declared a holiday as a precautionary measure. Petrol bunks and shops were also closed.

This is the second shutdown in Telangana this month. The earlier two-day shutdown happened July 5-6.