Congress party president Sonia Gandhi figures as the seventh most powerful woman of the world in the Forbes list which is topped by German Chancellor Angela Merkel and US Secretary of State Hillary Clinton. 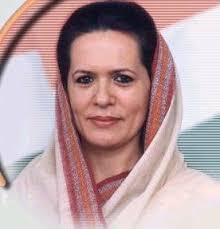 64-year-old Sonia Gandhi, who is recouping from unspecified surgery in a US hospital, is ranked seventh just ahead of US First Lady Michell Obama in a list of 100 most powerful women of the world released by the Forbes magazine.

Indian-American Indra Nooyi, the head of soft drink giant PepsiCo, has been ranked fourth, followed by Sheryl Sandberg, COO of Facebook and Melinda Gates co-chair and co-founder of the Bill & Melinda Gates Foundation. Two Indian corporate executives Chandra Kochhar of the ICICI (43rd) and Kiran Mazumdar-Shaw of Biocon (99th) have figured in this list in which the third place is occupied by Dilma Rousseff, who became Brazil’s first woman President.

“Gandhi is an avid scholar of the arts, and holds a degree in oil painting conservation. She recently underwent surgery in the US,” it added. “The managing director and CEO of India’s second-largest bank, Chanda Kochhar rules over assets of USD 118 billion and profits of USD 1.35 million,” Forbes said.

“India’s first biotech entrepreneur, Kiran Mazumdar-Shaw founded Biocon in 1978 at just 25. Since then Biocon has become only the second Indian firm to list a USD 1 billion IPO on its first day of trading,” it added.

German Chancellor Merkel is head of the one real global economy in Europe and is the “undisputed” leader of the EU. “Although overseeing a booming economy and falling unemployment, she contends with a weakening support base and crisis in the eurozone, where Germany is often in the unenviable position of bailing out its weaker neighbors,” Forbes said.

Clinton moved up to No 2 from last year’s No. 5.  In her second year on the job, Clinton continues to earn high marks for advancing US interests and policies overseas and pushing women’s issues, development and education to the top of the foreign policy agenda, Forbes said.

More popular than her husband, Michelle Obama’s approval ratings hover near 70 per cent while President Barack Obama’s are less than 40 per cent. “The first lady keeps a high profile with her mission to end childhood obesity and her stylish fashion picks,” it said.