Gujarat Chief Minister Narendra Modi today began his three-day fast for “peace and communal harmony”, saying the success of his endeavour would mean an end to votebank politics. 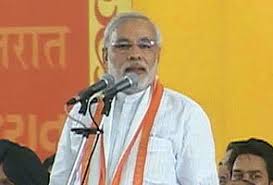 He also said that the fast was not against anybody.

“We want to take this spirit to each and every village … each and every house. This fast is not against anybody and I don’t want to speak about anybody. Gujarat wants to move forward. We want to be in service of India,” Modi said.

“We want to move together and Sadhbhavna (harmony) will be our strength. Development is our only motto. We will be a model for the world on how development can be achieved with peace, harmony and brotherhood,” the BJP stalwart said, addressing a gathering at Gujarat University convention centre, the venue of Modi’s fast here.

Speaking about the fast, he said “It was the need of the hour.”

“Unity, peace and harmony have a major role to play in our success, our development. Because we have treaded this path and I wanted this message to reach out to people, this fast was the best mean to do so,” he maintained.

“Six crore Gujarati have gone through a lot of penance to ensure such a situation. If I fast my words would carry more weight and I will be able to reach out to more people.”

This was the only objective behind the fast and there was no grudge against anybody, he said.

“Over the last 10 years we have been vilified. I have faced every attack so that you (people) do not feel the pain. I want to ensure that Gujarat never slips below the parameters of humanity,” Modi said.

He sought strength from God so he is able to dedicate his entire life to the people of Gujarat.

“May God give me strength not to have any bitterness or vengeance ever for anyone,” Modi said.

The Chief Minister said today the entire country and the world was discussing the development in Gujarat be it in industrial, agricultural, rural, education or in health sectors.

“Gujarat has been successful in its experiments in all sectors and has scaled new heights. After the 2001 earthquake, Gujarat was devastated and many thought it would never rise again, but Gujarat has proved them wrong.”

“Even the World Bank says that if a nation faces disaster like the 2001 earthquake it would take them at least seven years to rebuild, but the state did this in three years which is a big achievement.”

“In the very next year, 2002, Gujarat saw gruesome communal riots. This incident once again renewed the discussion that Gujarat has gone back on the path of destruction, but we handled this situation strictly and with strength,” the BJP leader said.

“The stones that were thrown on us have been used by us to build staircase,” Modi said.