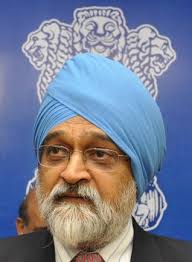 This will be the first meeting after the controversial affidavit, which was endorsed by the Prime Minister was filed in the Supreme Court. The matter will come up in the court on October 11.

The view of the Planning Commission that a person can meet expenditure of ‘food, health and education’ with a sum of Rs 32 in the cities and Rs 26 in the villages sparked widespread disbelief and condemnation forcing the Congress Party to go into damage control.

Congress General Secretary Rahul Gandhi too is reportedly unhappy with these figures.

“We understand that these figures could undergo a change. This affidavit is not the final affidavit,” said Information and Broadcasting Minister Ambika Soni.

Jairam Ramesh will meet Ahluwalia to discuss the removal of caps on social security measures. This implies that there will be no arbitrary cut-offs. Instead, the deprivation data of the socio economic caste survey being conducted by the Rural Development Ministry could be decisive. But is the Planning Commission open to the idea? Will it file a new affidavit?

Montek Singh Ahluwalia said, “There are different issues. I will discuss this with all the members, and then take a view.”

“Well, if you are always going to say that growth is primary and the poor should disappear from sight and if they are there, they should take the crumbs, then one day it will rebound like the India shining campaign . It’s a warning, it is not a statement,” said social activist Aruna Roy.

With Uttar Pradesh going to the polls next year, the Planning Commission’s affidavit is bound to be exploited politically. If caps are removed when it comes to deciding beneficiaries, it might be more acceptable to the states, politically beneficial for the party.