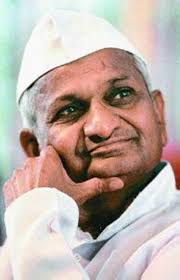 He also exhorted the people not to vote in favour of those politicians who don’t come out in support of the Jan Lokpal Bill.

Asked about Hazare’s statement that the Government should go if it does not pass the Bill by August 30, Kejriwal said Team Anna has no intention to topple the government.

“We have been repeating that our motive is not to topple the Government. If the Government is so insensitive even on the seventh day of protest and mass gathering, they are saying we will protect corruption and shelter the corrupt. So what is wrong if Hazare said this,” he said.

Earlier, doctors examined Hazare on Monday morning and said that he had lost five kg in the last seven days. Traces of ketones have also been found in his blood and urine, which is a byproduct of the body burning fat. Doctors added that there was no cause for concern.

Meanwhile, thousands of people have been thronging the Ramlila Maidan since Monday morning and the crowd is likely to swell as it is a public holiday on account of Janmashtami. Several thousand came in over the weekend to support Team Anna.

Hazare had on Sunday slammed the Government saying that it betrayed him at every step and warned it that it must pass the Jan Lokpal Bill or else go.

“The government has betrayed me at every step. Now, they have only one option – either pass the Jan Lokpal Bill or go. If Jan Lokpal is not passed by August 30, we will do a big protest which everyone will remember,” said Hazare while addressing his supporters at the Ramlila Maidan.

He said that his version of the Lokpal Bill was made with five others taking people’s opinion into consideration. He added that he warned the government about staging protests with regard to the bill, but they government did not pay attention.

“The government is not serious about fighting corruption. I warned them of protests, but they did not listen to me. That is why I have taken up this protest and will continue till the Jan Lokpal Bill is not passed,” Anna said.

He said that going to jail was not a curse but a blessing for him, adding that if he had a blot on his character, like some people say, then his crusade would have been crushed long back.

The Government has also roped in spiritual guru Bhayyu Maharaj and top Maharashtra bureaucrat UC Sarangi for back-channel talks with Team Anna. But there are no signs of compromise yet as Hazare’s fast entered Day 7 on Monday.

“Both sides want a solution. But there needs to be start, which is unfortunately getting delayed. I want both the government and Team Anna to come together for a strong Lokpal bill. Open debate should take place on contentious issue and talks should be transparent and in public domain. Anna’s arrest was a mistake,” said Bhayyu Maharaj.

The Government has also asked for four months to discuss and pass the Lokpal Bill, but Team Anna has refused that offer.