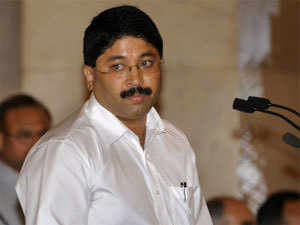 “No one can force anyone to sell the business. Moreover, Aircel ventures have been there from time to time in the media, and I have paper cuttings which state the same,” he told reporters here.

“Although most of the channels are trying to make a story today, saying that I forced, arm-twisted and strangulated to sell a business to the other person… let me tell you that Mr. Sivasankaran is not a millionaire, but a multi-millionaire.

“The paper cutting clearly proves that this particular company was parading itself much before I became a telecom minister. I have never had to force anyone to sell the business,” he said.

The DMK MP is facing charges of bending rules for granting 14 licences to Dishnet Wireless (now Aircel) during his tenure as telecom minister between 2004 and 2007.

According to Central Bureau of Investigation (CBI) sources, Sivasankaran Monday told the agency that he was forced to sell stake in his company after his applications for telecom licence were rejected by Dayanidhi Maran in 2006.

He said he was forced to sell his stake in Aircel to Malaysia’s Maxis Communications, whose owner is reported to be close to Maran and his brother Kalanithi, who owns Sun TV , added the source.