Political rationale appeared to rule over octonegarian DMK chief Muthuvel Karunanidhi’s emotion, as the high-level meeting of DMK leaders here on Friday decided to stay with the UPA government. For a party still nursing its wounds from a debilitating defeat in the assembly elections, the decision was not a major surprise, even if Karunanidhi continues to be pained over his daughter Kanimozhi’s imprisonment in the 2G spectrum allocation case. 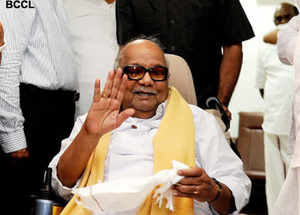 “This is no decision at all. He (Karunanidhi) has been unable to take a decision, and therefore he has allowed status quo to continue”, writer and political commentator Cho Ramaswamy told ET about the decision of the DMK leadership. “Different factions of the family are pulling him (Karunanidhi) in different directions”, Ramaswamy said.

The decision means DMK ministers MK Alagiri, SS Palanimanickam, Gandhiselvan, D Napolean, S Jagatrakshakan, and textile minister Dayanidhi Maran will continue in the Manmohan Singh cabinet. The party’s MP and former telecom minister A Raja is in jail, facing prosecution in the 2G spectrum allocation case along with Kanimozhi. It also means that Karunanidhi has been forced to continue his party’s alliance with the Congress, despite his recent comment that “bad friends will bring trouble”, apparently aimed at the Congress.

DMK has 18 Lok Sabha MPs, a crucial number for the stability of the UPA government, but is also shorn of perceived political power following its drubbing in the Tamil Nadu assembly elections where it ended with only 23 MLAs in the 234-member House.

While interacting with media persons after the meeting, Karunanidhi denied having any specific issues of dispute with with the Congress, and to a question whether the Centre was using the CBI as a political tool, he said he did not think so. To a question on the allegations against textile minister Dayanidhi Maran in the Aircel-Maxis deal, Karunanidhi said Maran was capable of giving the explanations himself.

There had been speculation about DMK likely to pull the plug on the UPA in the backdrop of denial of bail to Kanimozhi in the 2G spectrum allocation case. After the high court denied them bail, both Kanimozhi and Kalignar TV managing director Sharad Kumar, who both have stakes in the TV channel, have filed special leave petitions in the Supreme Court, challenging the High Court order.

Ahead of the high-level meeting, DMK leader TR Baalu had hinted that the party would not take any drastic measures, and that the talk about a pullout from the UPA government was “media speculation”. The DMK decision to continue its alliance with the Congress, also comes at a time when the Congress itself appears to be doing a rethink about their alliance with the Dravidian party.

The Congress mouthpiece ‘Sandesh’ had carried an editorial hinting that the 2G scam had an adverse impact on the party’s fortunes in the recent assembly elections in Tamil Nadu and Puducherry. Ahead of the polls, the DMK and Congress had bitterly fought over seat allocation, and both parties blamed each other when the results came. The DMK, with 23 seats is not even the main opposition party, while the Congress could win only five of the 63 seats it contested.