An improvised explosive device was used to carry out at least one of the three near simultaneous blasts that ripped through populated areas of India’s financial capital of Mumbai on Wednesday, the city’s police chief said. 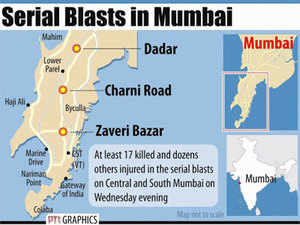 Arup Patnaik, Mumbai’s police commissioner told local television that an improvised explosive device (IED) was put inside an umbrella at Zaveri Bazaar, one of the three blast sites. He said the blasts at Opera House and Zaveri Bazaar were of a higher intensity than the one at Dadar.

“It is a terror act. Quite obvious that some terror element is involved in the attack. Zaveri Bazaar blast exploded with use of IED kept in an abandoned umbrella. All three blasts occurred between 6.50 and 7 pm,” Patnaik said.

He said the NSG hub in Mumbai has been put on standby and that the elite force’s ‘post-blast’ team has also been sent to the financial capital of the country.

No group claimed responsibility but Mumbai police suspects the hand of Indian Mujahideen(IM). Chavan declined to speculate on who could be behind the attack.

Maharashtra Chief Minister Prithviraj Chavan said at least 17 people were killed and 81 injured in the coordinated attack at Zaveri Bazar, Opera House and Dadar. The blast at Opera House was the “most powerful”, he said.

The explosions, which ripped through the country’s financial capital, went off just few minutes apart between 6:45 and 7 pm.

At about 6:45 pm, the first explosion took place at Shakeel Memon street in south Mumbai’s Zaveri Bazaar, near the famous Mumbadevi temple, in which 25 persons were injured, Mumbai Police spokesman Nisar Tamboli said.

The bustling market also has a number of jewellery shops. Some locals in Zaveri Bazaar claimed the explosive was kept in a motorcycle.

The second explosion was reported in a taxi in Dadar area, he said. The site of the explosion was close to dadar railway station.

Celebrated poet and lyricist Javed Akhtar condemned the bomb blasts saying it is not “acceptable”. “I have just been informed about it. There are no word strong enough to condemn the act. This is the time we check the menace called terrorism. It happened, again and then again. Something needs to be done. It is not acceptable,” he said.

“This is time that government now must take measures much stricter this time than they took before… The point is that they (terrorist) feel that there is no other way they can bring government to its knees than killing innocent people,” he said.

“It is worst thing that you can commit in any religion whether it is Islam, Hinduism, Buddhism and Christianity. The worst crime is to kill people,” Padamsee said.