The Supreme Court on Monday stayed Allahabad High Court’s verdict on Ram Janmbhoomi-Babri Masjid title dispute. The two-judge bench of Justice Aftab Alam and Justice RS Lodha was critical of the High Court verdict observing that it was “strange” as nobody had asked for partition of the land.

“This is strange and surprising. Nobody has prayed for partition of the disputed land. The partition of disputed land has opened a litany of litigation,” said the court on the September 30, 2010 verdict of the High Court.

The court questioned how could a decree be given for partition and directed all the concerned parties to maintain status quo at the disputed site. The court also directed that no religious activity should be performed on 67 acre area adjacent to the disputed site.

Expressing dissatisfaction over the High Court’s verdict of dividing the 2.77 acre disputed site into three parts among Muslims, Hindus and Nirmohi Akhara, different religious groups had approached the apex court. The appeals were filed by Nirmohi Akhara, Akhil Bharat Hindu Mahasabha, Jamait Ulama-I-Hind and Sunni Central Wakf Board. A petition has also been filed on behalf of Bhagwan Ram Virajman (seated Baby Ram).

The Wakf Board and Jamait Ulama-I-Hind had submitted that the High Court’s verdict should be quashed as it was based on faith and not on evidence. It contended that the court has committed an error by holding that the building stood at the place of birth of Ram. 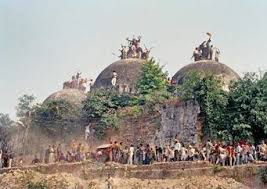 They submitted that claims of Muslims, Hindus and Nirmohi Akhara over the controversial site are mutually exclusive and cannot be shared.

The Hindu Mahasabha, on the other hand, has sought only partial annulment of the majority verdict of the high court, which ruled for handing over one third of the disputed site to Muslims. It sought the apex court’s endorsement of the September 30 minority verdict by Justice Dharam Veer Sharma who ruled for handing over of the entire land to Hindus.

A three-judge bench of the High Court’s Lucknow bench had passed three separate judgements on September 30 with the majority verdict holding that the area covered by the central dome of the three-domed structure, where the idol of Lord Rama is situated, belongs to Hindus.