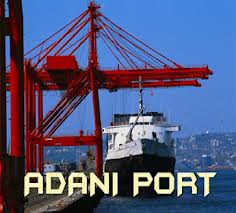 Gujarat-based Adani Group on Monday said it was all set to expand the Dhamra Port’s capacity to 100 MT per annum in Odisha’s Bhadrak district. “We are going to start work on expansion of the Dhamra port. Orders have been placed for the purpose.

Our vision is to build the Dhamra port on the scale of the Mundra port”, Adani Group chief Gautam Adani told reporters after meeting Chief Minister Naveen Patnaik and Chief Secretary G C Pati here. The company, which acquired the Dhamra Port from  L&T and the Tatas by paying about Rs 5,500 crore, targets to enhance the port’s capacity from 25 MT to 100 MT.

Dhamara Port Company Limited (DPCL) chief executive officer Santosh K Mohapatra said: “DPCL had sought 700 acres of land for the expansion project which was sanctioned by the state government. We will begin work on expanding the port capacity soon.” An equal joint venture between L&T Infrastructure Development Projects (IDPL) and Tata Steel, Dhamra Port Company (DPCL) was commissioned in May 2011 with an 18-km approach channel and a dedicated 62.7 km rail link to Bhadrak.

In May, it had executed a pact with both the companies to acquire the Port for about Rs 5,500 crore. The port handled 14.3 million tonnes of cargo in 2013-14. DPCL, the operator, had been awarded a concession by the Odisha government to build and operate the port on Dhamra river in Bhadrak district for 34 years, including four years for construction.

The concession period may be extended by two additional terms of 10 years each. The first phase construction, at an investment of Rs 3,200 crore, started in March 2007.