DMK MP Kanimozhi and Kalaignar TV MD and CEO Sharad Kumar have been arrested in the 2G spectrum scam case. A Special Central Bureau of Investigating (CBI) court dismissed the bail petition of Kanimozhi and Sharad Kumar in the case on Friday following which they were taken into custody. 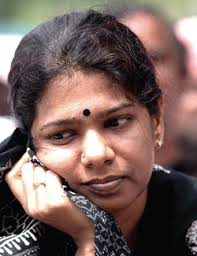 While rejecting their bail petition Judge OP Saini ordered their “forthwith” arrest and directed the duo to appear before it at 10 am on Saturday. Kanimozhi and Kumar will be lodged in Delhi’s Tihar jail.

After the judge rejected her bail petition, Kanimozhi looked tensed but said that she expected the order. A Raja’s wife walked upto her and comforted her.

She also sought permission from the court to get her reading glasses, books and medicines.

Kanimozhi, the daughter of DMK chief and former Tamil Nadu chief minister M Karunanidhi, has been chargesheeted by the CBI for allegedly accepting Rs 200 crore as bribe for Kalaignar TV, where she is a 20 per cent share holder.

Both have been chargesheeted by CBI for allegedly conspiring with former telecom minister A Raja in the 2G scam case.

She has also been charged under the Prevention of Corruption Act for taking bribe through Kalaignar TV – a channel run by DMK – in which the bribe of Rs 200 crore was routed from Shahid Usman Balwa’s firm DB Realty.