The CBI today opposed in the Supreme Court the bail plea of DMK MP Kanimozhi and co-accused Kalaignar TV MD Sharad Kumar in the 2G case on the ground that if released, they could tamper with evidence and influence witnesses. 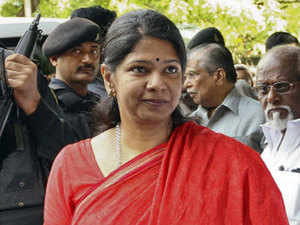 In an affidavit filed before the apex court, the investigating agency contended that Kanimozhi and Kumar were key conspirators and Rs 200 crore transferred to the Kalaignar TV was part of the “bribe” amount and not a loan as claimed by the accused.

The agency said that since investigation in the 2G case is at an advanced stage, it will not be proper for the apex court to grant bail to the accused.

The apex court had on June 13 asked the CBI to explain where the Rs 200 crore, allegedly diverted to DMK-owned Kalaignar TV in 2G scam , has gone and also to file a response on their bail pleas in a week’s time.

A bench of justices B S Chauhan and Swatanter Kumar, while terming “corruption as the worst form of human rights violation,” had asked CBI to come out with a status report on the loss to the state exchequer due to the award of 13 licences to one of the telecom operators and trial proceedings in the CBI special court.

Kanimozhi and Kumar had moved the apex court seeking bail on June 10 challenging the Delhi High Court verdict rejecting their bail on the ground that they have strong political connections and the possibility of them influencing witnesses cannot be ruled out.

Named as accused in the second charge sheet for allegedly taking a bribe of Rs 200 crore, the two were arrested on May 20 after the special court dismissed their bail pleas in the case.