The Supreme Court will hear on Monday the bail pleas of DMK MP Kanimozhi and Kalaignar TV MD Sharad Kumar, accused in the 2G spectrum case. 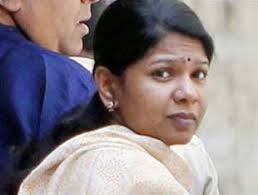 A vacation bench of justices BS Chauhan and Swatanter Kumar will take up the matter which is listed as Item No. 16.

The High Court had on June 8 dismissed their pleas after observing that they have strong political connections and the possibility of them influencing witnesses cannot be ruled out.

Kanimozhi and Kumar, named as accused in the second charge sheet for allegedly taking bribe of Rs 200 crore, were arrested on May 20 after the special court dismissed their bail pleas in the case.

Both Kanimozhi and Kumar have 20% stake each in Kalaignar TV Pvt Ltd, which allegedly received Rs 200 crore through a “circuitous” route from Shahid Balwa promoted DB Realty.

Karunanidhi’s wife Dayalu Ammal, who has been left out of the list of accused, owns the remaining 60% shares in the channel.

Kanimozhi and Kumar had moved the high court on May 23 challenging the trial court’s order which had rejected their bail pleas, saying the offence attributed to them was grave and the possibility of influencing the witnesses cannot be
ruled out.

CBI Special Judge O P Saini had on May 20 rejected the bail pleas of Kanimozhi and Kumar and ordered their “forthwith” arrest. They are currently lodged in Tihar Jail.