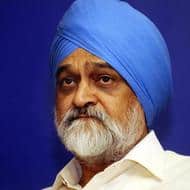 Hit by a currency crisis and poor growth, India today ruled out approaching the International Monetary Fund (IMF) for assistance, saying the economic situation has not reached a point where outside help is warranted.

“Our current economic situation does not warrant it. I do not anticipate it in the near future,” Ahluwalia said, adding “India’s reserves are comfortable.”

Ahluwalia was asked to comment at a news conference whether India would seek outside help like approaching the IMF for assistance against the backdrop of a wave of poor economic news for the country.

He was briefing newsmen about the upcoming summit of G20 economies that included India. The two-day summit which will be attended by Prime Minister Manmohan Singh is to be held in St Petersburg in Russia from September 5. The Prime Minister is leaving for the eighth summit of the G20 on September 4.

India last approached the IMF for funds in 1991 during a balance of payments crisis that was considered a national embarrassment.